The following are two article I wrote for a paper

On July 9th I left the UK for Israel. A week before my father had called and asked “Are you sure you want to go? You know it looks like there’s about to be a war there.” I replied “Yes Dad”. As one does. A week later I was a stone’s throw away from the Egyptian border (surrounded by 50 Israeli Troops), wondering whether our program director (a former Israeli ambassador to South America) still intended taking us to the Lebanon border. At this stage, the Highland Whisky from Heathrow was just about finished – Scottish Whisky being the most English thing I could find in duty free to share with the rest of my group. The group included people from 24 countries from across the globe. I recently got an e-mail from one of them apologising for not understanding my British accent. I obviously had to apologise to him… on two counts; not being understood and not being British.

The 50 Israeli Troops were not usual. On the way to the Negev Desert (the Sinai Desert when it hits the Egyptian border) we had to pull over. It was somewhere near Ashkelon. After twenty minute we stopped for lunch. Our director looked worried as we got off the bus, a few minutes later rounded everyone up and told us we’d stop somewhere else to eat. A quick head count as the bus pulled out showed us 3 short. The driver reluctantly turned off the engine. An American and I, went to find the stragglers, two Australians were casually eating an ice cream without any idea the rest of the group had left. They returned to the bus. Five minutes later we found our Indian colleague. He was casually chatting to some locals, we pulled him away and asked if he’d like to return with us. We obviously weren’t clear, as he asked if we wanted some tea first, while urging us to calm down. Ten minutes later we were on the bus. The next day we learned the initial stop was due to a missile landing near Ashkelon, in one of the villages we’d passed through in fact. 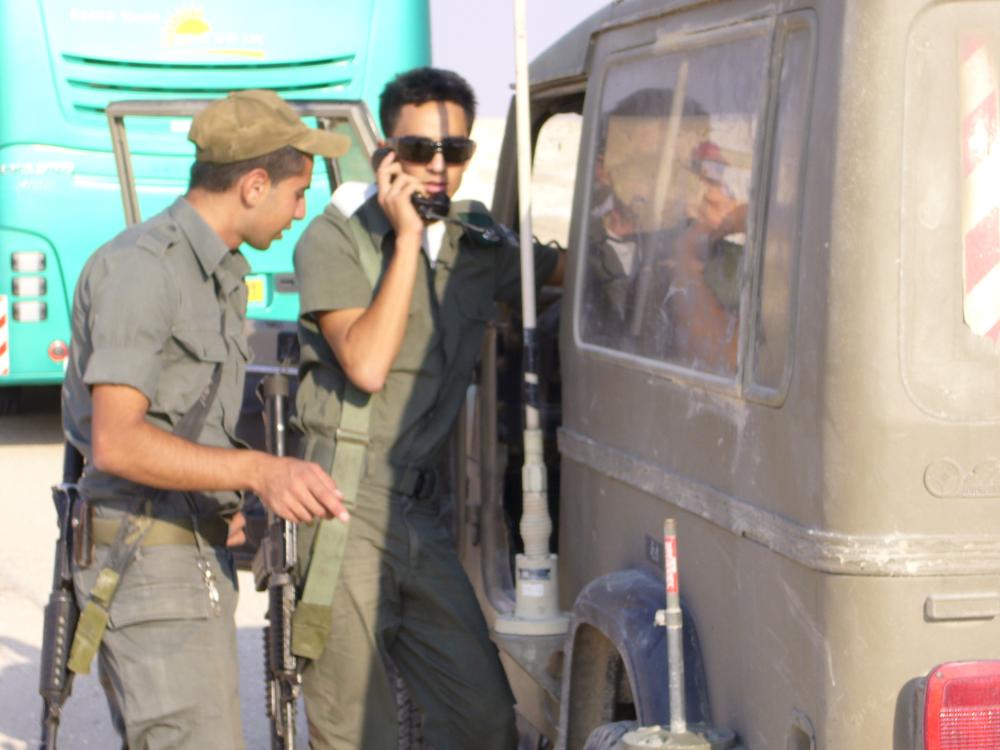 The soldiers? It turns out the border with Egypt was destroyed in one spot while we were in a research station right alongside it. With the open border, hundreds of people crossing illegally into Egypt, missiles and who knew what else, someone decided the stations security wasn’t up to scratch, and the Army was sent in. The old research station also serves as an absorption centre. They teach new immigrants about the Israeli culture and language. School children visit and learn about the environment, recycling and self sufficiency in the desert. Under normal circumstances security is not particularly high. We were there over the Jewish Sabbath and there was only one other group. The other group was made up of British high school students. It was agreed to try and ignore the conflict on the day of rest. No news. No interruptions. As a hundred or so foreigners tried to ignore the conflict, fifty soldiers wondered around carrying their weapons at all times.

We returned to Jerusalem. Specifically, we returned to the Crown Plaza hotel and the Israeli Ministry of Foreign Affairs. The hotel was full. The language in the hotel had switched from a mix of English, French and Spanish to Hebrew. A group of kids were riding the lift. Up and down, up and down. When I came to dinner and hour later, they were still riding the lift. Families fleeing northern Israel were everywhere. To their credit the hotel increased provisions for the kids’ entertainment, but at night you could hear the crying and complaining of children who just wanted to go home.

The ministry was another story. Other than losing our seminar room (the Press Centre you will have seen on the news), life seemed to be going on as normal… at least with a pretence of normalcy. We heard a lecture about Civil Rights in Israel from a former head of the Israeli civil rights movement. We heard from a former High Court Judge, Hadassa Ben-Itto, who quite the bench to write a book on “the protocols of the Elders of Zion”, a well established forgery that incited violence from Tzarist Russia to Nazi Germany. It’s available in a new edition each year with a new foreword. The latest problems the world faces are always somehow blamed on the Jews in this foreword. Judge Hadassa said the book is available in London. All I could think of was NUS conference two years ago when fliers referring to the protocols as fact were distributed (leading to three officers resignations). Both of these lectures took place in the auditorium as the British, French and German foreign ministers met in our lecture room in front of the world’s media. We had to get back to the hotel and turn on CNN to find out what had happened. 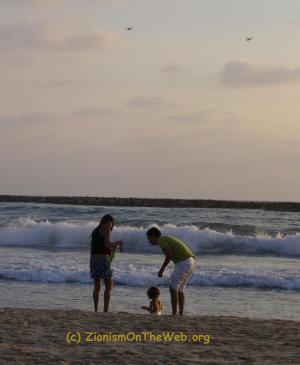 We may have been in the middle of it all, but you only really know what you see yourself.

Jerusalem, July 22. My birthday. We were on a free weekend. Our program director had nipped home to a wife that had been calling him with increasing worry as the situation developed. “She’s not from Israel” he had explained. I’m not sure if he expected a group of people not from Israel to get that. Maybe we’d been there too long and were now able to push the situation to back of our minds (for whole hours at a time) as we got on with life. The first question on meeting someone after a break, or seeing someone arrive late was still “what’s new?” the answer was usually “nothing yet, the same”. Perhaps it’s not surprising that one of the most common greetings in Israel is “Mah Nishmah?” loosely translated as “What’s new?” but literally “what have you heard?” After almost 2 weeks of crisis it was starting to make sense.

The David Citadel. Well, not really. Our Director (who it turns out was a tour guide before joining the civil service) had arranged for us to visit the citadel early one morning before it opened to the public. That was three days ago as we saw workers putting together a high tech installation around the old stone walls. The director had explained how this wasn’t actually the citadel of King David (it wasn’t possible since it was in the wrong place). The citadel was actually built by Herod the Great and the tower everyone recognises as “The Tower of David” is actually a Turkish addition to the citadel. The only connection with King David is a bronze copy of Verrocchio's "David", a Renaissance sculpture gifted to Jerusalem by the city of Florence. But back to the present. Tonight the new summer entertainment at the Citadel opens. We have opening night tickets. My purple card actually got me a student discount (fancy that). The giant mechanical instruments were lit up and sound began to filter across the old stone walls. We climb the stairs and walk along the parapet, peeking through the arrow slits and between the turrets, then someone’s phone began to ring. 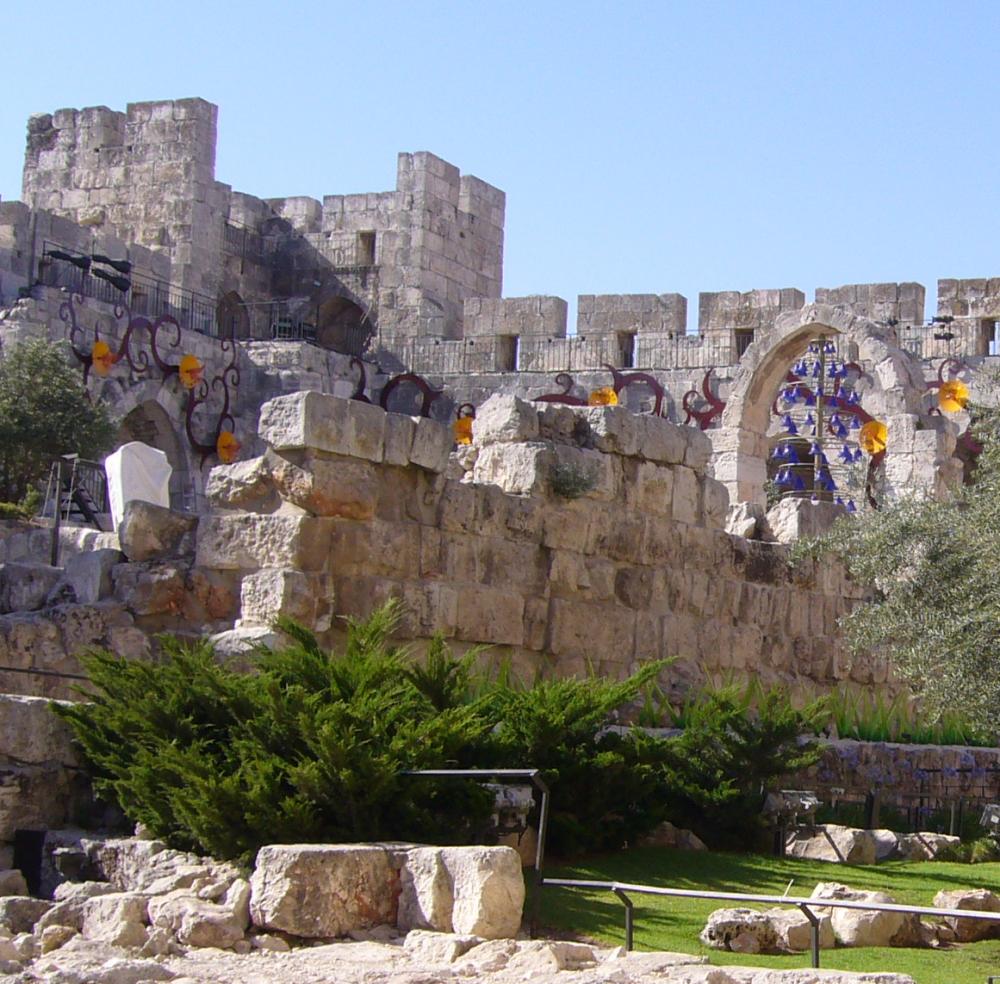 It was America on the line, then France, other countries followed. Did we know there was an attempted suicide bombing in old Jerusalem? Umm… we look around at the stonework, okay, we’re at the edge of old Jerusalem, right next to one of the cities seven gates, definitely in the old city. We eventually decide to leave and head to Ben Yehuda street. The street is named after a man who single-handedly revived the Hebrew language, from one solely for prayer, to one of daily life. The street is a pedestrian mall, much like the centre of Lancaster on market day, only far busier and with trendy cafés lining the pavement. A few steps after entering the street the same thought hits all of us, Ben Yehuda street has been the target of suicide bombers not once but thirteen times. Most recently in 2001 when ten people were killed, mostly children, and 188 injured. We had dinner, where I bumped into a friend from St Andrews and heard Flora Hoori was also in Jerusalem. Some places really do seem to be at the centre of things, for better or worse.

The group split after dinner, some of us staying to watch Israeli kids break dancing in the middle of the street. Only in Israel. The key organiser appeared to be a religious chap who couldn’t have been older than 16. We’re talking black suit and hat. Next to him a kid in ripped jeans and another in a tracksuit. And they’re off. Absolutely amazing. Classes were announced for Wednesday, I’m sure they’ll have some takers. The onlookers, mostly kids, keep rushing over to greet each other as they saw school friends from else where in Israel suddenly gathered to this little spot. Laughs ring in the street. We’re half waiting for something to happen. But nothing does. We may have been in the middle of it all, but thankfully you only really know what you see yourself.
Posted by Andre Oboler at 4:10 pm No comments:

It's easy to argue over names. But I'm not going to. If "Team-Evil Arab hackers" is what these guys want to call themselves, that'll do for me. This group have taken down over 750 Israeli servers, and not content have now started targetting Jewish servers mentioning Zionism. Jerusalem Post and Haaretz each have articles on them. Their connection with Zionism on the Web started when the the European Union of Jewish Students server was taken down. ZionismOnTheWeb was included in the initial round of e-mails and helped assess the risk and severity of the problem.

We then backed up our servers. 48 hours later, we were hit. Having found multiple scripts runing on the server, we began disabling them before the site was defaced. Removing all those we found and upgrading some software left us feeling relativly safe. It didn't last. A few hours after reporting the site cleaned up, our forums, blogs, and photo gallery were defaced exactly the same way as WUJS.

Through the night we battled with Team Evil. We plugged gaps and restricted access, they opened a new gap and injected php scripts. Eventually with the aid of our ISP we restored completly from the back up and rapidly reimplemented fixes. This threw them, but only for an hour or two. Soon the blogs were down again.

In a last ditch effort, we disabled the blogs. The forums (which now seemed secure) went as well while we checked them (and manually disabled code that had a security flaw). The Zionism On the Web forum is now back online. Our blogs at Zionism On The Web are disabled, so it's just as well we have this extra external blog going. For more info on Team Evil or to post your own experience... see the Hacked Topic in our Zionism forums.

For those that are interested, all the attacks originated from the Saudi Network Information Center, ISU, King Abdulaziz City for Science and Technology. The Internet Services Unit (ISU) is the department of King Abdulaziz City for Science & Technology (KACST) responsible for providing Internet services throughout the Kingdom of Saudi Arabia.
Posted by Andre Oboler at 5:16 pm No comments: